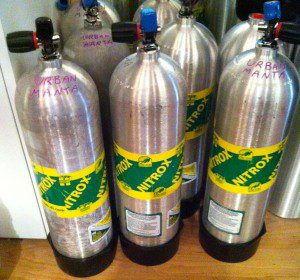 Nitrox is simply a gas mixture composed of Oxygen and Nitrogen.  Normal air contains 79% Nitrogen and 21% Oxygen (excluding trace elements).  By increasing the amount of Oxygen, the percentage of Nitrogen is reduced which lessens nitrogen uptake by the body’s tissues during a dive.  Nitrox divers can increase their dive time and/or reduce the risk of decompression sickness.  Some divers claim to feel more energized from breathing increased amounts of Oxygen.  During a live aboard or a multi-day diving trip the benefits of breathing reduced amounts of Nitrogen are gained through longer dive times on repetitive dives or a greater safety margin to prevent the bends for the conservative diver.